IT Link recycles its electronic equipment with Zack

The IT Link Group trusts Zack to give a second life to its equipment. 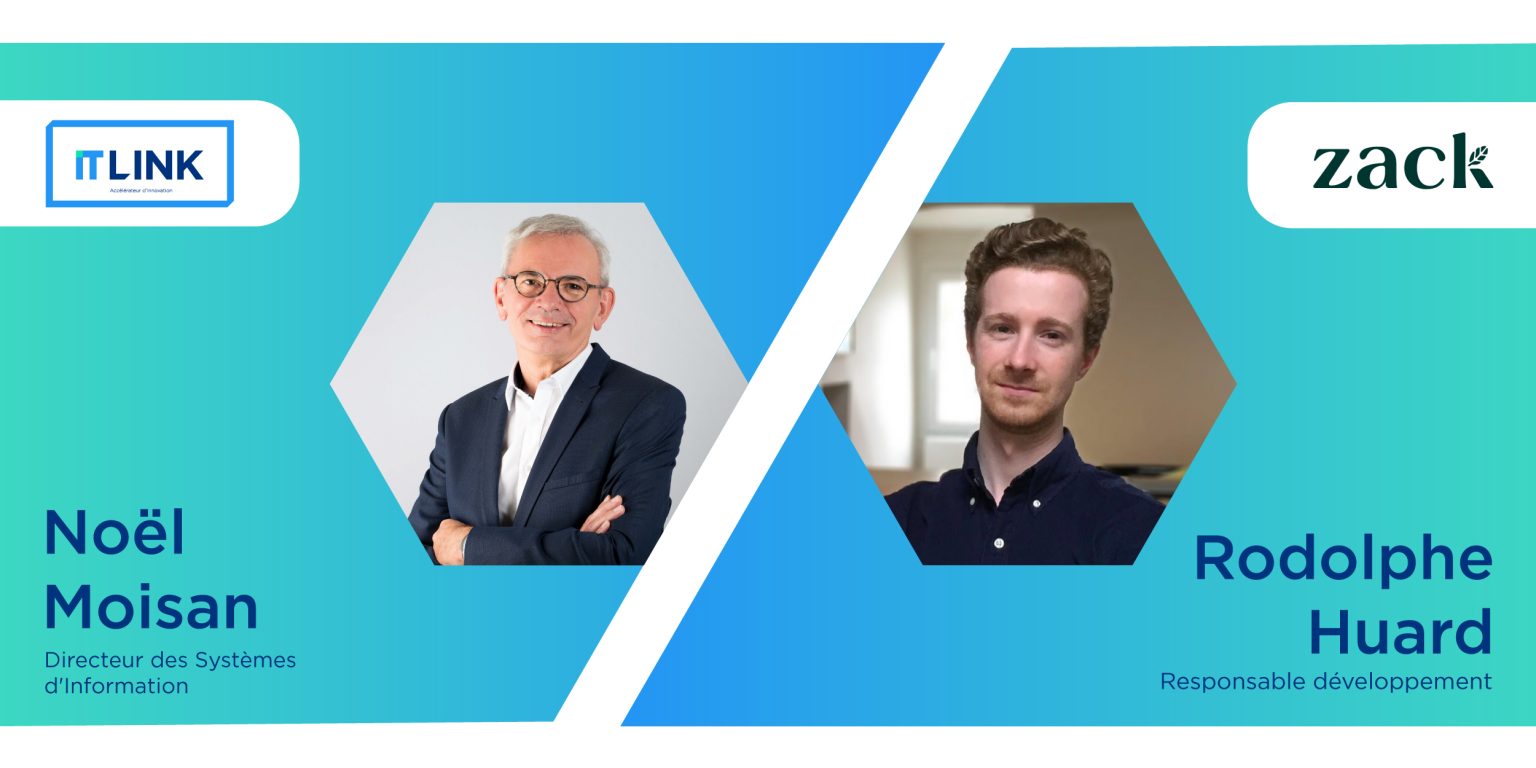 MEETING BETWEEN NOËL MOISAN, CIO OF THE IT LINK GROUP AND RODOLPHE HUARD, DEVELOPMENT MANAGER AT ZACK

Can you tell us about your company in a few words?


Rodolphe: Zack is a circular economy company. We fight against the waste of electronic products by maximizing the reuse of computer equipment in companies through sales, charitable donations and recycling. Our goal is to have an environmental and social impact!

Noël: IT Link is a digital services company specializing in connected systems. We support our customers in their innovation and transformation projects, from sensors to business applications.

Tell us about the genesis of this collaboration?


Rodolphe: During my former activity, I was already collaborating with Noël in another area. When I joined Zack, I simply reconnected with him having seen that IT Link was looking to reduce its environmental impact.

Noël: Indeed, the social and environmental impact of our activities is at the heart of our concerns, particularly at the DSI where we manage large volumes of equipment; so when Rodolphe contacted me again as part of his new activities at Zack, it was only natural that we collaborated.

What challenges do you face today for the recycling of computer equipment?


Rodolphe: As a committed player in reuse, our main challenge is to raise awareness among IT managers to offer the best possible second life to their IT equipment. Indeed, the default solution is still sometimes to entrust everything to a simple recycler who does not bother to sort out the devices that could still be used or repaired...

I also note that it is important to teach because many devices are unfortunately considered "to be recycled" after only 3-5 years by the IT teams when they could still be used very well until 7-8 years no problem. The main constraint is often the lack of performance but this does not prevent, for example, giving this material to associations. I also like to inform that as nearly 80% of the environmental impact is linked to the manufacture of the devices, it is crucial to extend their lifespan as much as possible to compensate for the initial footprint.

If today some companies have not yet launched, it is more for lack of information than for lack of desire, especially when habits are already anchored. Many of our customers had sometimes already been recycling their equipment for many years, but without having any visibility on what had become of their equipment. The CSR report that we provide them precisely allows monitoring and measurement of the positive impact.

Noël: We have a relatively large computer park within the DSI, and the quantities of discarded equipment are increasing. Until now, we were disposing through recyclers who destroy materials to recover only the raw material, which posed two problems for us. First, we felt wasted because we thought that some hardware that was no longer usable for IT Link could be used for other uses, and second, to ensure safe disposal, we had to extract the hard drives and destroy them through another channel.

When Rodolphe presented Zack's activity to us and demonstrated his ability to give a second life to equipment in a secure way to either resell them or give them to associations, this seemed to us to be a relevant and rewarding way for the end. life of our equipment.

Following the crisis we are experiencing, have you observed any changes in behavior?


Rodolphe: For more than a year at Zack, we have been dealing with two phenomena. The first is the growing desire of companies to reduce their environmental footprint while being able to measure it. I see that there are often employees with a lot of goodwill who are ecologically and socially involved in their private lives and would like to play a role for their companies. They are usually the ones who push lots of great projects internally.

The second phenomenon is a profound change in uses, a direct consequence of the Covid which is the generalization of telework. As a result, many companies had to equip themselves with a mobile fleet (laptops, smartphones, etc.) and wanted to get rid of their fixed devices (central units, screens, IP telephony, etc.). As a result, many companies contacted us because they simply did not want to throw away this equipment, which was often relatively recent but no longer corresponded to their current needs.

Noël: To pick up on what Rodolphe has just explained, in the case of IT Link, we have since noticed several years through the press or even the expectations of some of our customers, that controlling the environmental impact of companies was a fundamental subject to take into account in our activities and on which we are now sometimes evaluated. Even if at IT Link, we have always been attentive to this subject, the crisis has brought out new players and helped some companies like ours to concretely embark on new approaches.

The emergence of teleworking did not lead us to renew our fleet because we already supplied almost exclusively mobile equipment with regard to the mobility of our users. Nevertheless, by the conjunction of these two phenomena, and the possibility of recovery with Zack, we recently removed from our stock the last fixed equipment that we kept “just in case”.